I held my treasured boy as he quietly went to sleep for the last time.  He was gone in seconds, peacefully, painlessly and most importantly with dignity.

It had  been getting more difficult for him to get up and he was struggling.  On that last night I tried to lift him and for the first time in his life he cried out.  As I looked into those beautiful brown eyes I knew the time had come and I had to be fair to him.  He was ready to go be with his mates, Christian, Miss Pyn, Thomas, Gracie and Dot.  I’m comforted to know they were all waiting for him.

“Shamus, my boy,” I told him, “you’ve been like no other dog I’ve ever known … always the most loyal and honourable mate imaginable.” 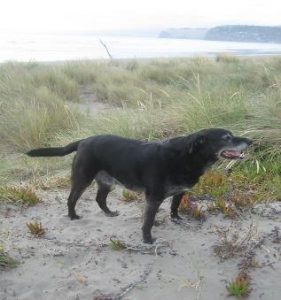 I remember the early days with dear little Shamus.  He came from a farm near Lincoln, was only four weeks old and had to learn to drink from a sponge.  He loved the beach, everyday running and playing with Gracie and all the other dogs.  He loved the dunes and the raging winter tides.  He knew everyone and they knew him.

Difficult to photograph, Shamus knew exactly when to turn away.  He was definitely one of a kind – my boy.  He loved his tucker; salami, anything left from the roast, chicken and salmon.  I confess to letting him eat way too much.  In the end though it made little difference.  He outlived them all, made it to a grand old age with a shiny black coat – even though his face and paws were totally grey.

His best treat was to go out in the car.  Only days earlier we managed to get to the supermarket where he waited patiently for the customary cheerios.  Surprisingly he even managed to easily get out of the car.  Little did we know it was going to be the last journey.

When we lost Gracie only a few months ago he really grieved. Now they are together.

I have no idea how to cope with the utter emptiness he leaves me with.